Well what an interesting weekend, Saturday we was planning on paddling from Glasbury to Byecross campsite. A distance of around 22miles I believe. The shuttle went well and we managed to get on the water around 11am. The start point was very busy with paddlers from all over hiring out canoes etc.

The weather was fabulous so plenty of fluids taken with us, not forgetting the pubs stops along the way. The water was shallow in 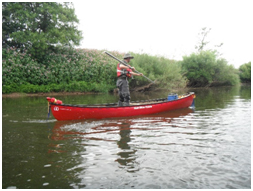 places so perfect for polling

We managed to get into Hay on Wye, moored up. Tony told us how to get into town for those who wanted a refreshing beverage and a bite to eat and to be back in 40 minutes to continue to the journey to the next portage stop at Whitney on Wye. So after a refreshing sherbet (cider or 2) we headed back down to the river and had our sarnies, I had taken Pete Kings van keys of him and put them in my Pelli case with my smokes. Any way we all headed off downstream about 40mins into the journey I wanted a smoke, so I go to get my fags out of the Pelli case, ???? where`s the case. I asked Pete and some others if they had seen it, not since we left the last stop. The pace was a gently one so after speaking to Pete I then paddled back up stream whist he informed Tony that I will catch them up further down stream . I passed 3 large groups of paddlers whilst I was going up stream and asked them all if anyone had seen a red pelli case with fags and van keys in. 1 lady said yes it’s at the landing stage in the wall, there is someone keeping an eye on it. What a relief, It took me an hour to get there from when I left the crew. I thank the gentleman nicely and headed back down stream, over taking the 3 groups I previously passed.

I heard Pete`s voice shout down from the bank at Whitney which was the next stop 2 stops shorter than what was planned. I pulled in thinking that they was waiting there for me. Not realising that we had a safety car for the day, Tony drove up to the last stop and was told by the same gentleman that I had been, collected and was heading back down stream. As we wouldn’t have got into camp until around 7pm it was decided to end it there for the day and continue in the morning.

We all got back into camp and cleaned up ready for the BBQ that evening laid on from the camp site, we all sat around a large table, chilled with a few more beers. 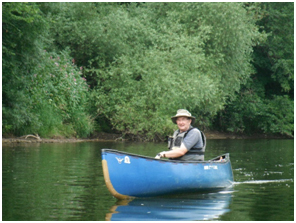 Sunday `s trip was from the camp site to Hereford, We left Pete in charge to get the canoes down to the water’s edge whilst the shuttle was taking place, to find out on our return he smoothed talked some Scouts who was doing an expedition to Hereford as well. So with his charm the boys carried all our kit down and moored them up.

We paddled off and stopped at a nature reserve for a spot of lunch, Tony and I was discussing sailing as the wind was on and off. The best place would be the straight just as you come into Herford. 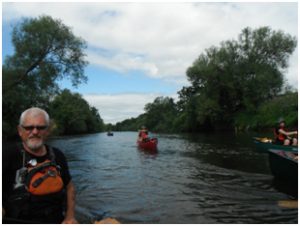 We caught up with the scout group had stayed with them having a laugh along the route.

We got onto the home leg and tried the downwind sail, it worked for all of 10 minutes whilst Tony tried his sail to no avail. We made Hereford and packed our kit away, said our goodbyes etc. Then departed for home.