Throughout the week there was a forecast of rain, with my ear to the ground I could hear murmurings of a paddling trip being formed to North Wales, by Thursday nothing was finalised. Saturday afternoon around 4pm my phone goes off with a text from Duncan saying they have been paddling today, the rivers are up and its still raining. At this time I was climbing in Leicester making the most of the glorious sunshine and not a spot of rain in sight. Within 10 minutes of arriving home my boat is on the car and im on my way to North wales,  Duncan and Natalie are sorting accommodation out while I drive only to be updated later on. 2 hours into my drive I pull over in the standard Dobby’s service station to get an update of where my bed will be, with sat-nav set im off to find Betws-y-coed youth hostel. 10:30pm I arrive to find the other two about to go to bed, im given keys to my room and the instructions to meet for breakfast 8am.

After a surprisingly good nights sleep in a very hot 8 bed shared room full of people, with rain lashing on the window by my head im getting breakfast waiting for the others. With the rivers being high and still raining we decide to go North and try the Ogwen, none of us had done it before but we had the guide. The guide did not help at all with the get in, after much driving round we found what we though was “a” get in, got changed, drove my car to the get out and went back in Duncans to trudge through a random forest to the river.

We had no idea where we were in relation to the get on but we know we were down stream and the Grade 5 section. We argued as to the grade as he guidebook said grade 4 but I think it was grade 4 with some 4+ the other two said it was a little lower and the guide book was wrong. The start was continues bolder gardens with decent sized pour overs, waves and rocks to avoid. We played follow-my-leader down most of it inspecting from eddies as we went. For those who came to Austria last year will remember I spent a lot of time with my spraydeck off sponging out my boat. Today was no different, the problem being most of the eddys were only slightly bigger than my boat.

We arrived at many horizon lines, boulders,  and a ledge with a large wave followed by a very technical get out at the bridge in a micro eddy to the waiting car. Its at this point I realise the error of my ways. We’re standing on the bank looking at my car with the dry kit in only for me to voice the fact my car keys are safely in Duncans car back at the start. Queue me running back up the road in canoeing kit to return with Duncans car 30 minutes later.  Boats loaded and were off for another run only this time from higher up.

Cars shuttled, keys in back of boat with me, were off. This was the start of around 3kms of new river to us. We came around a corner with me being at the back saw Duncan first go over the looming horizon line in front turn to the right and paddle somewhat enthusiastically, Nat followed and did the exact same turn to the right as well as the same  amount of enthusiastic paddling.  I knew something was there, down I go, end up hitting a rock which knocked me to the left only to be faced with a wall of rock holding in a huge stopper, large turbulent  eddy to its left with a simple line down by pointing right. I was getting it wrong and the odds were stacking up fast against me.  Can I make the eddy and use it to turn me round? Can I do this backwards? “ I don’t want to scratch my new boat on this rock, my god that’s a big hole” is whats currently  going through my head.  I went for the eddy  to turn my boat around, perfect only problem is my boat was falling into the side of this huge hole with a very aggressive paddle stroke im through although upside-down im out of the death grip of this hole.

After than more rock/ hole dodging to the end, followed again by the exciting get-out in the micro eddy, load boats and head home after a brilliant short notice river trip on what is now one of my top if not the top river ive paddled in North wales. 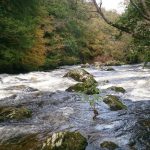 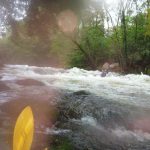