When I saw that Andy Davis was running a trip on the Usk I thought ‘great that’s just what I want to do.’  Having done the WW course and a couple of Matlocks, his comment that is was an ideal progression into white water sold it to me and I signed up straight away.  Over the next few weeks it grew in my imagination into something more like running the Grand Canyon and I started to wonder if I’d done the right thing.  Cut to 23rd Nov. and a fine if rather fresh Saturday morning, having had a very comfortable night in the bunkhouse which was warm, clean and very well equipped  (with more spoons in the kitchen that you could ever need!).  Scraping frost off the cars underlined the certain knowledge that the water was going to be cold and I resolved to remain the right way up for as long as possible.  The put in for day 1 was about 20 minutes’ drive and with, a fairly minimal amount of ‘faf time,’ we were on the water for about 10:30, fourteen in all.  Not the raging torrent of my imagination but a gentle, picturesque river.  There was a quick safety check from Peter, so then I knew we had first aid kit and a shelter, there was a bit more faf time while someone sorted out car keys and then we were off.  A couple of easy rapids and some very pleasant paddling on the rather low water – I scraped my bottom a few times – before arriving at the first drop.  We all piled out and made our way along the bank to see what was ahead.  I have to say that, to my ‘newbie’ eyes, the drop was quite impressive and the sound of the water added to the drama.  But Andy, Steve and the other ‘old hands’ talked us more juniors bods through the best route and what to do and what to avoid.  They also made it clear that there was no pressure to do it and it would be fine to portage.  So, back to the boat and with confidence, and determination that was 80% fake, I let Sarah go first.

Then I was off and heading to the drop.  It was actually quite easy (although I’m sure I made it look harder) to keep the correct line and I was over the drop in no time.  Everyone else made it safely too and so we moved on to the next.  Now much more confident and really enjoying the trip, the next two drops were successfully negotiated by all and the group’s mood was high.  The rest of the day was a delight, there were plenty of rapids to run and rocks to negotiate (actually rocks don’t negotiate, they are really quite stubborn). Some we ran through and some was for playing in and there were some sneaky hidden rocks that tried to tip you but nothing that was really difficult. Back at the bunk house thoughts turned to the route for day two. There was some speculation about water levels and whether the Wye would be a better option. Also whether or not the land owner would be running a shoot that day – Andy thought ‘probably not’ which wasn’t really that reassuring!  Day-two and the latest plan was to stay on the Usk.

Nine miles on day one had left some with aches and so this was to be about half that.  The weather was cloudy at first, so not such a pretty day, but that meant it was a bit warmer too.  Advice for the day was that it would be a bit more technical, which I took to mean ‘concentrate.’  There were eight of us stalwarts remaining and the paddle started much like day one with rapids and rocks with bits of play time too. Then the we came to a very interesting feature which was a drop with a rocky rapid to follow. Again we had a good look and planned the route before taking it on.  This time there were some lines that you really didn’t want to take – but everyone made it through successfully.  Next there was a boulder garden; by now I was quite focused on spotting and (mostly) avoiding them whilst at the same time remembering the mantra ‘hug the rock – rocks are you friend.’

It really was a great couple of days and I learned a lot about reading the water and got some useful tips from the ‘pros’. It was, as Andy said, a great way to develop moving water skills, there’s plenty to do but also enough time between features to take it in. There were no swimmers – two paddlers went over and both rolled back up again, but I’m confident that any swimmers would have been picked up very quickly.

So if you can do the WW course and you want to get on a real river then look out for the next trip it’s what paddling is all about. 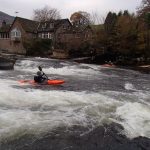 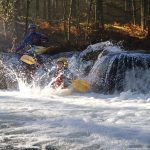 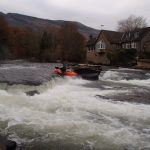